So, I finally got around to setting up a Wiki for the Cemeteries stuff!

So far, I’ve created one page, for the St. Peter Street Cemetery. My plan is to go more-or-less chronologically, so the next page will be St. Louis No. 1.

My vision for COTD Wiki is that it should be a collaborative effort. I don’t want to be the only author/editor. If you have an interest in our cemeteries and would like to contribute, you are most welcome! If you enjoy MediaWiki development/structure, you are equally welcome.

Example: There is so much stuff out there on St. Louis No. 1, since it’s the oldest cemetery in town that’s still around. I plan to do a history page to start, but then there are so many details to be added. Please join me in filling in those gaps.

Photographers: If you have cemetery photos, either done for documentary or artistic, please consider sharing them. I’ll be raiding the Commons as this unfolds, as well. Full credit given to ‘togs for their photos, but keep in mind, this Wiki is public domain.

If you’re a cemetery fan/historian in another city, let’s talk. We can easily set up sections for other cities/towns.

TEACHERS: If you are a history or social studies teacher, and would like to include COTD Wiki in your lesson plans/activities, let’s talk. This would be exciting and make me very happy, to see the site used in this way. Students do some of the best research/development/writing, and there are lots of us in the community who would like to help you and your kids succeed. Let’s make that happen as much and as often as we can.

My vocation as a teacher compels me to encourage learning, exploration, and discussion. Our cemeteries are not just local treasures; they are known the world over. Let’s document them, preserve them, explore them, and have fun doing it!

French explorers and trappers came to what is now New Orleans in 1699. By the 1720s, the settlement had grown to the point where Pierre LeMoyne, Sieur d’Bienville, commissioned a plan for what is now the French Quarter. Part of the street plan that Adrien du Pauger laid out for Bienville was a graveyard. That first cemetery was located at what is now the corner of N. Rampart and St. Peter Streets, at the outskirts of the French Quarter. We refer now to this graveyard as “The St. Peter Street Cemetery”; in the mid-1700s, it was likely just called “the cemetery”, then the “old cemetery”, after other cemeteries were constructed. The land for the cemetery was owned by the city government, but the cemetery itself was administered by the Catholic Church, through the chapter of St. Louis Church (which was not a cathedral until 1794).

One of the interesting aspects of the St. Peter Street Cemetery was the lack of racial/ethnic segregation with respect to burials. The key was not skin color, but religion. The French and Spanish colonials were Catholic, and if you were baptized, it was permitted for you to be buried in consecrated ground. An article from the University of New Orleans’ Archaeology blog relates the story of a 13-year old slave girl, who died and was buried oustside the confines of the cemetery. Her family petitioned the city’s Superior Council to permit them to re-inter her in the cemetery, since she was a baptized Catholic.

By the time ownership of New Orleans was ceded from France to Spain in 1766, the city outgrew the St. Peter Street Cemetery. In addition, specific incidents, such as the Natchez revolt of 1729, forced the city to temporarily close the cemetery because of the number of burials. By the 1780s, it was impractical to continue to regularly use the cemetery. The Church acquired land on what is now Basin Street to construct a new cemetery. That cemetery is St. Louis Cemetery No. 1. Since this cemetery’s design was of a permanent nature, it still exists.

All burials in the St. Peter Street Cemetery were in-ground. As a result, the city built a wooden framework around the block bounded by St. Peter, Burgundy, Toulouse, and Rampart Streets, so burials would be above the water table. Prominent/wealthy citizens of the city were buried in vaults below St. Louis Church (later St. Louis Cathedral). This practice continues to this day, for retired Archbishops of New Orleans.

Google Earth view of the block that was St. Peter Street Cemetery

When Vincent Marcello, the owner of a house built on top of St. Peter Cemetery, planned a swimming pool for his backyard, he brought in a team from the University of New Orleans Archaeology Department. Since it was extremely likely digging for the pool would disturb the burial site. Consequently, the team discovered fifteen coffins, which were removed and re-interred, with proper ritual and respect.

In New Orleans, cemeteries are known as “cities of the dead.” Because the city is located below sea level, buried coffins will not stay underground. As a result, residents bury their dead in above-ground tombs and vaults, forming the “buildings” of these “cities” within the city. New Orleans families, organizations, and benevolent societies build lasting monuments, from the simple to the ornate, to their loved ones. Many of the more lavish monuments are known throughout the city as landmarks. Like all New Orleans architecture, the cemeteries capture the unique character of the Crescent City.

More than twenty-five years have passed since the publication of the first volume of the New Orleans Architecture series. Pelican and the Friends of the Cabildo remain committed to recording and preserving the unique architecture of New Orleans, having published a total of eight volumes on the subject.

I walk past this tomb regularly in St. Patrick’s Number 1, when I park the car by the cemetery to have breakfast in Mid City. I don’t know anything at all about the Galway family, but that their surname matches the name of a city in the West of Ireland intrigues me.

St. Patrick’s Number 1 for the Irish

The various ethnic groups of New Orleans organized to build cemeteries to bury their loved ones. The French-Spanish-African Creoles had the St. Louis cemeteries in Faubourg Treme, the Germans the St. Joseph cemeteries, and the Irish, the St. Patrick’s cemeteries at the end of Canal Street. St. Patrick’s Number 1 was constructed in 1841.

Immigrants coming to America were often leaving a rough life behind in Europe. The Irish in particular had a difficult time of it, between being under British rule and famine wracking the country in the 1830s and 1840s. The Irish needed to escape their homeland, and were willing to take just about any job available to make ends meet in their new homes. In New Orleans, one of the dirty jobs the Irish took on was the construction of the New Basin Canal. Many Irishmen died building the canal, either from the heat or from yellow fever borne by the mosquitoes that lived in the swamp. Still, the Irish perservered, overcoming the odds and carving their own niche in the city.

Many immigrants were more than willing to drop their pasts in the ocean, arriving in the New World with as little baggage as possible. Is that what the first Galway did? Was he a Ryan, a Fitzgerald, a Houlihan? Did he get into some scrape back home, forcing him to take ship for Liverpool, where he would become “human ballast” for a trip to America?

Any Irishmen would recognize his West-of-Ireland accent, therefore there was no way to avoid identifying with that part of the country. Perhaps, rather than carrying his father’s last name to America, he changed his name to that of his home town? 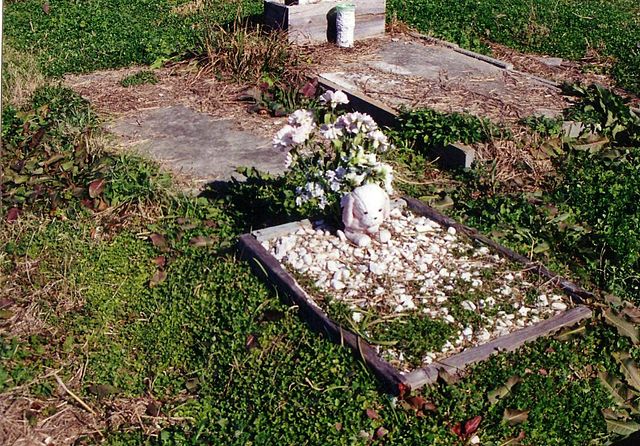 Holt Cemetery is located next to Delgado Community College in Mid City/City Park. Etablished in 1879 as a potter’s field for the city, Holt is for families who can’t afford burials in private cemeteries may bury their loved ones at Holt. The tradition is that a family retains “ownership” of a plot if they keep it up, and can re-use the plot for other family members. What ends up happening, however, is the graves fall into neglect, and the cemetery ground reclaims them over time. Then another family will bury a loved one in what appears to be open space.

You can see the process beginning with this grave. There’s no headstone or permanent structure. The wood frame will fall apart, and grass is already overtaking the interior of the plot. There are other graves that are regularly cared for inside Holt, as well as a few permanent monuments. The largest monument in the cemetery is to Charles “Buddy” Bolden, the trumpet player who was one of the earliest jazz musicians in the city.

Holt Cemetery goes through phases of disrepair and renewal. Since it’s a city property, it isn’t cared for like the private cemeteries, or even the city cemeteries that are mostly above-ground tombs and copings. Holt will go through a phase of neglect, where grass and weeds will overwhelm the plots. Volunteers will come in, clean the place out, and the graves will once again be visible. Hurricane Katrina’s flood waters wiped out a large number of earlier graves, but most of the permanent monuments survived.

There are so many stories in this cemetery. Forgotten men, women, and children, as well as loved ones who are remembered, but the families just couldn’t make more-lasting memorials.

This photo is one of several from June of 2005. The images were scanned from film, and I uploaded them to Wikimedia Commons.

My cemeteries website, Cities of the Dead (dot net) has been neglected by me since I started my NOLA History Guy page/project. I plead the excuse that the history books need to get sold! As a result, a lot of dust gathered here. I really, really want to create a proper wiki for cemetery stuff, though, so it’s time to get about that.

Here’s the plan: This site will consist of a blog and a wiki. The blog (you’re there now) will be the free-form section. I walk through cemeteries all the time, taking photos, making observations. Those observations will go here. I’ll post entries for the wiki here first, to see what sort of feedback and comments are generated. For example, a wiki entry for a cemetery will need a start/landing page, as well as a history page. This blog will be the sounding board for those. Editing a wiki isn’t difficult, but all too many folks won’t take the time to do it. They’ll comment on a blog.

Additionally, some things just don’t fit the wiki format. Maybe just a quick observation while on a walk, or a poem inspired by a tomb or statue. They can easily go on the blog, and we can discuss whether they should go into the wiki.

The cemetery wiki will be more structured, an attempt to organize the stuff from the blog. Cemeteries organized chronologically, by neighborhood, etc. Historical facts. Personalities. Significant monuments/tombs/graves. I’ve tried to block this out a bit, and will update everyone with some mind-maps as the project develops. For now, I’m going to install mediawiki on the server and see if I can find a simple wiki that I can use as a template for style.

The wiki should be a community project, so I encourage anyone interested to get involved! More on that as we go forward.